Includes singer Rachel Caswell doing “Tell Him I Said Hello” from her new CD, All I Know on Strikezone Records. Strikezone specializes in creative music produced by the musicians themselves. It’s run by jazz guitarist Dave Stryker. Another recent Strikezone recording, heard extensively on SNJ, is Messin’ With Mr. T, featuring Stryker doing the music of Stanley Turrentine, with whom he played for many years. Dave Stryker grew up in Omaha, Nebraska and moved to New York City in 1980. Gary Giddins in the Village Voice calls him “one of the most distinctive guitarists to come along in recent years.” He was recently voted once again one of the Top Guitarists in the 2014 Downbeat Critics and Readers polls for the 7th time. His most recent CD “Eight Track” was also picked as one of the Top Albums of 2014 in the Downbeat Readers Poll. 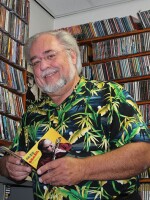