And let's stay with things that glitter. We take you now to a glacier on Oregon's Mount Hood. Explorers there have discovered more than one mile of caves, the largest-known glacier caves in the United States outside of Alaska. Right now, a survey team is using those caves to measure how much the inside of the glacier is melting each year.

As Amelia Templeton of Oregon Public Broadcasting reports, this is dangerous work, going inside a melting cave. But it could provide important information on the impact of climate change.

AMELIA TEMPLETON, BYLINE: The Sandy Glacier flows down a steep canyon on the west side of Mount Hood, just an hour from Portland. A few months ago colorful tents sprung up on the snow.

TEMPLETON: It's a camp for cavers and search-and-rescue volunteers who are here to survey the caves in the Sandy Glacier.

EDDY CARTAYA: In some of these caves, a broken ankle is a fatal injury, because of hypothermia.

TEMPLETON: That's Eddy Cartaya, the leader of this expedition.

CARTAYA: If you can't crawl out, you're dead from exposure.

TEMPLETON: Cartaya is an avid cave explorer and ice climber. He's wearing a yellow jumpsuit embellished with patches from the Forest Service and cave rescue groups.

He leads a small team into a cave named Pure Imagination, just a short walk from camp.

TEMPLETON: The cavers follow a stream of whitewater. It flows out of a broad crack in the snow. One by one, we climb through the fissure and into a white tunnel.

At first, the stuff above our heads is called firn. Its snow that's slowly being compressed into ice as the air gets squeezed out of it. After a few minutes, Cartaya shines his headlamp on the wall.

CARTAYA: This is glacial ice here. It's dark. It's dirty. Very compact ice there.

TEMPLETON: So this is really, like, right where the glacier starts.

CARTAYA: Yes. This is literally the toe of the glacier. This is the beginning of it.

TEMPLETON: Cartaya leads us deeper into the cave. The walls are white, marbled with ribbons of bright blue ice. It's so big, you could seat an entire orchestra inside. We rope up to climb past a steep waterfall. At this point, we're underneath ice more than 10 stories thick.

We just descended a waterfall in a glacier cave. Woo!

But while I'm caught up in the adventure, Cartaya is thinking about all the survey work he has to do.

CARTAYA: We've got to take width and height measurements all through the cave, because it's grown way more than we expected.

ANDREW FOUNTAIN: This could be, you know, an important insight in how these glaciers are decaying.

TEMPLETON: That's Andrew Fountain. He's a glaciologist with Portland State University. Scientists like Fountain study how much ice glaciers gain or lose every year. One common approach is to set up stakes on the surface of a glacier to measure how much it melts.

FOUNTAIN: What we don't know is what's happening underneath the glacier, because we have no really easy way or direct way of doing that.

TEMPLETON: That's what makes the data that Eddy Cartaya is gathering so valuable.

TEMPLETON: Inside a cave called Snow Dragon, Cartaya's teammate holds a distance meter up against a wall of ice and shoots a red beam of laser light across the cave.

Cartaya records the height, width, and slope of the passage in a waterproof yellow notebook.

TEMPLETON: Nearly every glacier in the Pacific Northwest is retreating, due primarily to climate change. Photo comparison studies show that between 1907 and 2004, the Sandy glacier lost about half of its ice.

The caves, which can't be seen, are an additional loss of ice. And Cartaya says warm air is moving through the caves and causing the glacier to melt even more quickly.

CARTAYA: These are short-lived treasures, and once they're gone, they're gone forever. They'll never be back.

TEMPLETON: Cartaya says, on the one hand, it's exciting his maps will be part of the scientific record. On the other hand, watching a glacier melt is kind of like losing a friend. 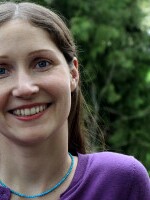 Amelia Templeton
Amelia grew up in Portland. She got her journalism start atSwarthmoreCollege, reporting for a podcast. She spent several years working as an advocate for refugees in Washington, D.C. and the Middle East.