The Tiny Desk team had huge plans for 2020 — including what should have been the taping of our 1000th Tiny Desk concert — only to pivot madly as COVID-19 forced the closure of NPR headquarters in mid-March. By the end of that month, we'd launched a new companion series: Tiny Desk (home) concerts, which gathered intimate, Tiny Desk-style performances from all over the world. It's been a feat of forced innovation, made possible through inspired performances and our incomparable Tiny Desk team of producers, videographers and engineers. So we asked that team to pull off one more feat as 2020 draws to a close: narrowing nine months of great Tiny Desk (home) concerts down to a single playlist of highlights.

Jhené Aiko's Tiny Desk (home) concert is a manifestation of the healing powers in music. I've lost count of how many times I've watched this performance. Our generally kind YouTube viewers left thousands of comments that go well beyond a simple "Thank you." They've expressed how the set has helped to ease anxiety attacks or cope with loss and stress in 2020. It's truly remarkable. Aside from that, Jhené Aiko and her band managed to orchestrate something that's tailor-made for the Tiny Desk: From the sound bowls to the harp to her incredibly soothing tone, they perfectly capture the series' spirit. —Bobby Carter

Like many of us, I was unable to enjoy a real vacation this year. There's nothing like the feeling of turning the outside world off and cozying up with a book or vibing out to some good music. Buscabulla's Tiny Desk — performed in a van on the beach in Aguadilla, Puerto Rico — provided that getaway for 13 minutes. —Bobby Carter

Jacob Collier might be the most talented person (people?) on earth. What I like most about his home concert are his NPR socks. Also, there are four of him, which makes for the ultimate feat of social distancing. —Josh Rogosin

I've listened to the music of this humble legend for 50 years. She's a transformative voice in traditional folk music, and what's more impressive is that none of us, including Shirley Collins herself, thought she'd ever sing again. After a broken heart and painful divorce, she lost her voice; for 30 years, she couldn't sing. Now 83, she performs in her living room, singing unimaginable tales with that unadorned voice that altered the sound of folk music. There was little good in 2020; this was a miraculous highlight. —Bob Boilen

Linda Diaz won the 2020 Tiny Desk Contest with her song "Green Tea Ice Cream." Usually, the winner is brought to Washington, D.C., to perform their own Tiny Desk concert, with lots of fanfare and NPR swag, and then swiftly taken on a Tiny Desk tour of the U.S. Obviously, this year challenged us to do something new that still felt like the Tiny Desk. After numerous video meetings with Diaz, the band and our senior security officer to ensure that we could pull this off and keep everyone safe (thanks, Caroline!), we headed to the green roof on top of the Javits Center in midtown Manhattan. It was a special shoot, the only one I've been on since March, and made even more special by the fact that we were performing for a couple of Javits Center employees who took care of the people of New York City in the nation's first makeshift COVID-19 hospital. —Kara Frame

So there's this cool new artist, you probably haven't heard of her... Billie Eilish? Just kidding, of course you know her. In fact, her home concert broke our record for most views of a video in a 24-hour period (only to later be broken by BTS, but that's a story for another time). Eilish is known for thinking outside the box, and that's exactly what she brought to the "desk." She built her own Tiny Desk and tricked our viewers into thinking she was in the office until the camera finally zoomed out to reveal that it was only a set. While we still dream of having Billie Eilish at the real Tiny Desk, her version of the desk will have to do for now. —Morgan Noelle Smith

I love this Tiny Desk for a few reasons. First, it was my first concert to produce, which is a bit of a rite of passage at NPR Music. I was ecstatic because of this, and even more so because Madame Gandhi is a musician I believe in for her uplifting, advocacy-laden lyrics and equality-focused work. Her concert was published toward the end of June, just after America faced a social reckoning amid the pandemic, and her concert created a space for the audience to meditate on inclusion and equality. —Kara Frame

Lianne La Havas was the first musician I thought of when Tiny Desk (home) concerts began. It's so refreshing to hear her songs stripped down in her first Tiny Desk from 2015. Five years on, it's impossible to deny the intimacy of watching La Havas perform up close and personal with just her guitar and laptop. She accomplished what I love most about the Tiny Desk (home) concerts series, giving her audience a behind-the-scenes peek into quarantined life making music at home. She sent us two files: one lo-fi recording captured from Apple's Photo Booth software, the other an unmonitored take from a handheld recorder. If you listen carefully, you can hear my mix crossfading between the lesser of two evils. Even with the occasional distorted audio, watching her fingers dance up and down the fretboard is mesmerizing. —Josh Rogosin

This year has brought us anything but tranquility, so anytime I hear something that can give me even an ounce of serotonin, I listen. Enter Michael Kiwanuka. You might know his music from the opening sequence of Big Little Lies, but you should also know him from this gorgeous home concert. Believe me when I say that this might be the most relaxing 22 minutes of your 2020. So pour yourself a glass of wine, light some candles and settle into this lovely Tiny Desk. You can thank me later. —Morgan Noelle Smith

When I began having concerts at my desk in April 2008, the impetus was to strip away the curtains and crutch of technology — freed from studio effects, artificial reverb, lights, fast-cut camera editing and more to find the soul of the performer. Adrianne Lenker's Tiny Desk (home) concert, recorded in a camper trailer parked somewhere in Joshua Tree National Park, does just that. What we hear is her frail yet powerful voice; her vulnerable storytelling shines brighter for its stark platform. —Bob Boilen

When I was in the sixth grade, I couldn't get enough of "She Don't Use Jelly." I was just discovering music, and The Flaming Lips' album Transmissions From the Satellite Heart was one of the first tapes in my collection. The band stayed with me throughout my youth. I have fond memories of listening to Yoshimi Battles the Pink Robots during college, so this Tiny Desk (home) concert hit me with some welcome nostalgia. The group played a couple old tracks and a couple new ones, all while inside their infamous bubbles. The mint-green walls and pink floor in their studio remind me of watermelon Bubblicious gum... anyone else? —Maia Stern

This is Rodrigo y Gabriela's second visit to the Tiny Desk, and I love seeing it through the lens of the Tiny Desk (home) concert series. They're playing together in their cozy, well-decorated studio in Mexico. Their sneakers and casual attire add to the feeling that I'm right in the room with them — but I'm not, I'm here, working at home, in my pajamas. So what a treat it is that I can get swept away by their riveting duets. —Maia Stern

Bob Boilen
In 1988, a determined Bob Boilen started showing up on NPR's doorstep every day, looking for a way to contribute his skills in music and broadcasting to the network. His persistence paid off, and within a few weeks he was hired, on a temporary basis, to work for All Things Considered. Less than a year later, Boilen was directing the show and continued to do so for the next 18 years.
See stories by Bob Boilen
Bobby Carter
See stories by Bobby Carter

Josh Rogosin
Josh Rogosin (he/him) stumbled into NPR HQ in 1999 on his way to mixing shows at The Shakespeare Theatre in downtown DC. Since then, he has been at the controls for all of NPR's flagship newsmagazines and gathered sound in far flung places like Togo and Benin, West Africa, Cambodia and Greece for the Radio Expeditions series. He has engineered at NPR West and NPR NY and spent two years as Technical Director at Marketplace Productions in Los Angeles. He served as Senior Broadcast Engineer for New York Public Radio and Studio 360, and was an originating producer and sound designer for NPR's Ask Me Another.
See stories by Josh Rogosin

Kara Frame
Kara Frame is a video producer for NPR and pursues personal projects in her free time. She most often produces for NPR's explainer series, "Let's Talk: Big Stories, Told Simply." She's crafted stories about housing segregation in Baltimore, MD; motherhood in a refugee camp in Lesbos, Greece; and food deserts in Washington, DC. Frame enjoys a break from the news when filming the Tiny Desk Concerts.
See stories by Kara Frame 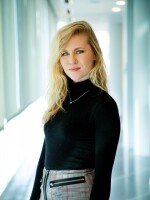