After a week of being sedated in the ICU with a feeding tube down my throat, I awoke hungry and confused.

I had lost 20 pounds, and there was a drainage valve protruding from my head. I had not showered in days; the hospital gown felt strange; and at times, I didn’t know my own name.

One day I was just a normal 20-year-old college student and the next I was being rushed to the hospital for a severe headache, coupled with vomiting. Doctors thought I had cancer or a tumor. But after a whirlwind of tests, it turned out to be an arteriovenous malformation, a tangle of abnormal blood vessels, causing bleeding in my brain.

I needed emergency surgery to relieve the pressure and the pain.

When I woke up from an induced coma, I was so damn hungry. I had one carnal question for everyone around me: what’s your favorite food?

One of my favorite answers came from a middle-aged, male nurse in the neurology unit, who confided in me that his wife wasn’t a very a good cook. To avoid hurting her feelings, he convinced their two little girls to act like they liked her cooking. And together, they quietly hatched a plan to frequently request one dish that they all honestly enjoyed. This had become his favorite food.

That’s been seven years ago.

At first, asking this question and hearing stories helped me recover and develop memories. As time went on, it became a standard greeting because what I found is that people often reveal something deeply personal when they talk about food.

Take this one for example. I was at Czech Days in Tabor, South Dakota, close to where I grew up. Talking to a retired cop in the beer garden, I asked him, “What’s your favorite food?”

He put his hands on his hips, looked up at the sky and contemplated his response like I had asked him about world peace. Finally, he said, “Noodles and tomato sauce.”

“You mean spaghetti?” I said.

“Nope,” he said. “Egg noodles and a can of tomato sauce. I can’t cook worth a s—. My wife and I have been married for 30 years, and when she’s away, that’s what I make. And now I kinda like it.”

There’s almost always a story about how something became a favorite food, but some responses are more simplistic.

Women will often say chocolate or something sweet. Men—and I feel like I can make fun of this since I am a man—will attempt to assert their masculinity by saying meat, medium rare. Kids give delightful answers; these are of the blurted-out variety. Hot dogs! Macaroni and cheese! McDonald’s! One little girl looked up and said, “Chipssssssss!”

Oddly enough, my question has made some people get defensive. And they’ve snap back, “Why do you want to know?” as if their favorite food is connected to their Social Security Number. Others want to know if the food is for a specific occasion, like a last meal.

As a therapist, it’s fascinating to hear how many people answer this way.

My only rule is that you can’t say pizza. Because who doesn’t like pizza? But I had one couple, in their early 30s, passionately defend their love of pizza. They told me about their first year of marriage and how poor they were. With what little money they had, they’d stock their freezer with Totino’s Party Pizzas. Sometimes, for sentimental purposes, they would still make those cheap pizzas on date nights. They had a good story, so I let slide.

For me, food provided a lens through which to view the Arab Gulf, where I spent a semester abroad in college. I lived in the country of Oman, next to Saudi Arabia and Yemen. My only fear there was being overfed.

As a group of students, we were once invited to attend the reception of an Omani wedding. And just like in America, there was a meal.

Food wasn’t only helpful with international relations; it was good for dating too.

Three years ago, on the dating app Tinder, I had just swiped right and matched with a girl named Mattie. I started the conversation with, “Hey! What’s your favorite food?” She later told me that was a better opener than, “Show me your boobs!” She’s still with me today.

When you make a habit of asking people about their favorite food, the question often gets repeated back to you. These days, my answer changes between my mother’s chicken lasagna; cheese, but not American cheese; soup, especially Vietnamese Pho; anything Italian; Indian curry and butter chicken; cheeseballs; chorizo burritos; and, yes, I must admit, stuffed crust pizza from Pizza Hut.

Ever since those hungry days in the hospital seven years ago, I have watched this question spark enlivened conversations about what people like to eat. Our identities and our experiences are so tied to what we sustain ourselves with.

So what’s your favorite food? 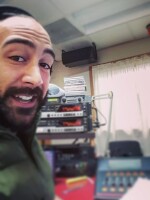